Today, I visited the ABC studios to film my first ever TV interview! I was so excited that I even took a picture with the sign outside:

The interview was for ABC3, so the studio was incredibly colourful. Here’s a snapshot with the awesome interviewer, Amberley: 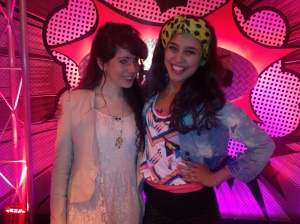 The interview will air in two weeks’ time on Studio 3, which runs in the morning before school. It features an intro package filmed at my house, starring my dog (and featuring me in funny costumes)!